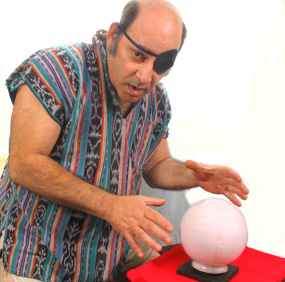 When asked to define what a real psychic is, most people have an interesting list of definitions which reveal their inner opinions and ideas. For many people, immediate images come to mind such as the creepy elderly woman with blind yet penetrating eyes, or maybe it’s the genie character with the turban who gazes into his magical crystal ball, or maybe it’s the gypsy who can cast and remove spells.

Movies and television do a great job of filling our minds with all sorts of scary and mysterious ideas about psychics. To add to this, a whole wave of “Ghost Tracker” shows give us the impression of violent, creepy dead people who have nothing better to do than hunt unsuspecting visitors (another great accomplishment to turn people away from anything metaphysical).

These cinematic depictions get great “ratings” for the television networks and sell lots of tickets at the box office. Unfortunately, they often also distort the truth of us “real psychics” who are really just regular people, with heightened awareness, who are really just here to help people.

The “sixth sense” is the faculty which marks the difference between a genius and an ordinary individual.

Here’s the bottom line. As an avid researcher, I can tell you the top scientists throughout the world have concluded that psychic ability is really just another innate sense that everyone has, although many people fail to acknowledge it or avoid it altogether. It may require training for you to access it, control it, and focus it, but it’s there within you.

A psychic is merely someone who can use a keen awareness to see details about the past, present, and future, and to see insights about events occurring at great distances. A psychic differs from the average person in their ability to exact information from a universal intelligence with more accuracy and control than the average person. By the way, this universal intelligence goes by many names such as Collective Consciousness (Carl Jung, forefather of psychology), Unified field (physicists), etc.

A Common Experience For Everyone

Psychic ability can go into other areas, some of which can get rather strange, but none of these things are outside of the scope of the average person. In fact, most people experience a whole range of psychic abilities on a regular basis, except they don’t recognize the experiences for what they are, they dismiss them, etc.

For example, when you feel someone staring at you and you turn your head to find you are right, when the phone rings and you know who is calling, when you have instincts about a situation that may be farfetched and others may disagree with you – then it turns out you were right, or when you have a dream about a future event and it happens! When you have knowledge about something and there is no physical or logical way you could have known, that is your innate psychical ability revealing itself.

A real psychic is really just someone who understands and benefits from a deeper scientific understanding of how reality works, specifically the scientific field of quantum physics. The model of reality understood in quantum physics is replacing the model that most people still think exists. I explain these things in more detail in some of my free educational guides and courses, but the point is that a psychic is not doing anything too far out of the ordinary.

Can You Really Not “Have It?”

Now some psychics will tell you they were “born with the gift,” they come from long genetic line of special psychics, or some other “I’m more special than you” rhetoric. Although this does a great job of stroking their egos, with training you can accomplish the same level of ability as any commercial psychic. In fact, with a little bit of training you will likely be more accurate and better at helping people than most psychics. Many so-called psychics have no formal training, which usually limits their ability.

I’ve trained people how to develop psychic and healing abilities for years, including police, military officers, doctors, and college students. Several of my students, whom started off with no obvious ability, have gone on to become successful professional psychics. So I know these things are possible.

My point in sharing all of these things with you is to encourage you to understand psychics with a more open mind, if you aren’t already. In fact, what a psychic “is” can be expanded upon much more than what is described here. Of course, I certainly don’t claim to have all the answers.

If anything, I think it’s good for others to understand what a psychic is NOT – someone more special than you, someone to be feared, someone with abilities you can never achieve, someone who is always a charlatan or scam artists, a crazy person, etc. These things are belittling and limiting, which I don’t believe is fair.

If you want to learn more about how a psychic can help you, or if you are curious about developing your own psychic ability, I encourage you to explore these other sections of my website:

If you would like tips for avoiding psychic scams, for finding the best psychics, and getting the most out of your time with a psychic, I encourage you to explore my Psychic Facts Guide:

Save Your Time, Your Money & Your Personal Respect. Get The "Insider Information" On Choosing A Good Psychic & How To Get The Most Out Of Any Reading - All For Free

I'm Dale Sellers, the founder of the LifeLeap Institute. For years, I've worked in professional settings where I've trained, tested, hired, managed, investigated, and sometimes fired professional psychics. I've worked in management positions for some of the Top Psychic Networks. I know what to look for in a good psychic, but I also know all the scams.

When consulting with a psychic, you are likely to make serious decisions in your life that could have permanent effects. You will likely invest a substantial amount of money. Despite the "10 free minutes" advertisements to hook you in, most psychics (including the networks) are charging between $120 to $540 an hour.

Because of my experience, I'm able to give you the inside scoop so you can avoid the numerous psychic scams you are destined to find on your search for a psychic. I also show you what specifics to look for in a good psychic and how to guarantee you get the most out of a reading/session.

Here is just some of what I have put together for you in Free The Psychic Tips Guide:

To really explain everything to you, I've broken the guide into several lessons, with something new available every few days.

Create your free LifeLeap Membership to get your Psychic Tips Guide, which includes articles, videos, and more.