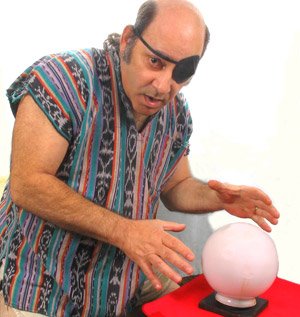 From my experience, I know there are definitely people who have the ability to help others by using psychic ability. Many times, I've seen individuals profoundly influenced by this type of experience.

At the same time, I don't think that many "professional psychics" deserve the money or time that their clients give them. I'm not trying to be critical, just honest.

I really think that many of the people in the field lack the training, experience, ethics, and the heart to help their clients. Why would I say this? Here's the simple reason – Many of the people calling themselves psychics really don't use psychic abilities when they are providing a service for their clients. Most of the time, the "psychic" is using other methods to get information from the client and just acting like it's psychic information. This type of thing is often called a "cold reading."

Now that we have that reality blaster out of the way, I'm going to tell you the two main categories of psychic scammers that you are going to run across. This is what you'll likely find whether you search for a psychic in the phone book, on the internet, in a national magazine, or you see an ad on TV (by the way, later we'll discuss how to find a good psychic).

Psychic Scams - Watch Out For The Solo Scammer

OK, the first category of a psychic scammer is what we'll call the Solo Scammer. These are the people that you have to watch out for the most.

At least with the Psychic Networks, which we will discuss in another article, you might get some type of quality control. If a psychic working on a network gets a lot of complaints from customers, sometimes the network will eventually fire them. They have to do this to avoid legal consequences.

The Solo Scammers, however, are operating on their own. They are individuals that aren't connected to a larger organization, or any company at all for that matter.

You may have seen the little offices in every city, offering "Palm Readings" or some type of similar claim - you know, the ones with the neon signs. This is the type of independent operation I'm talking about. It could even be a virtual office that has no location, a situation where the "so-called psychic" works primarily over the phone.

Now don't get me wrong - just because a psychic has a storefront or works on their own does not mean they are a scammer. There are some great "independent" psychics out there, you just need to know what signs to look for when making your final decision.

Here are some points to consider and help you identify a Solo Scammer:

So pay attention to the warning signs I've given you here. They could help you spot a Solo Scammer and could save you from a lot of unnecessary emotional and financial trauma.